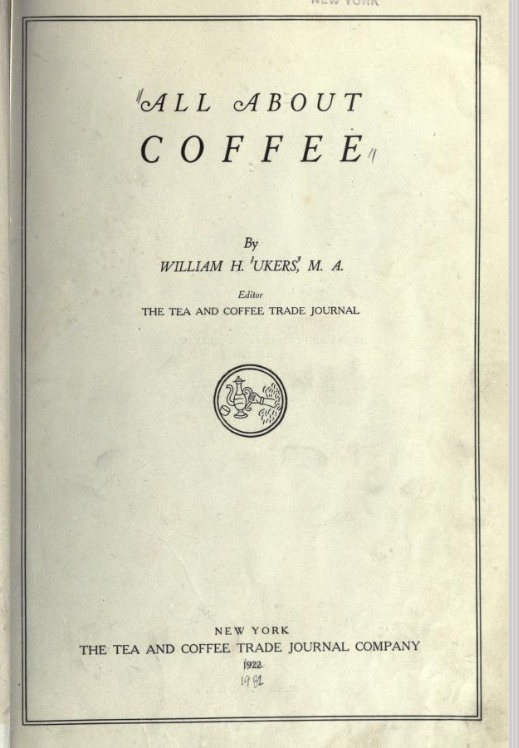 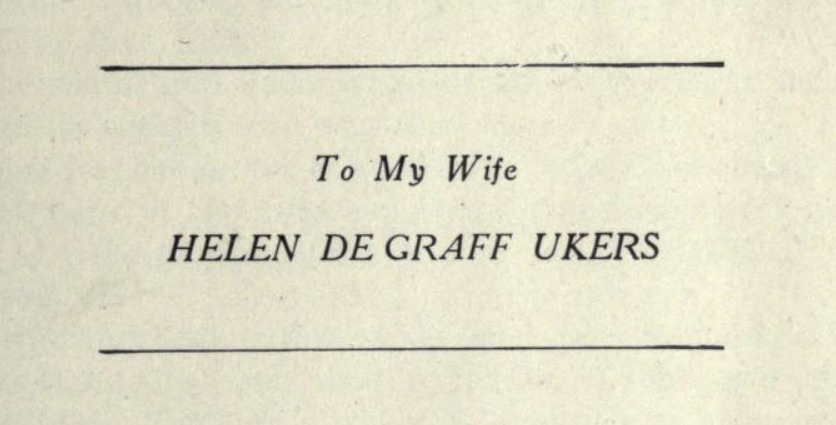 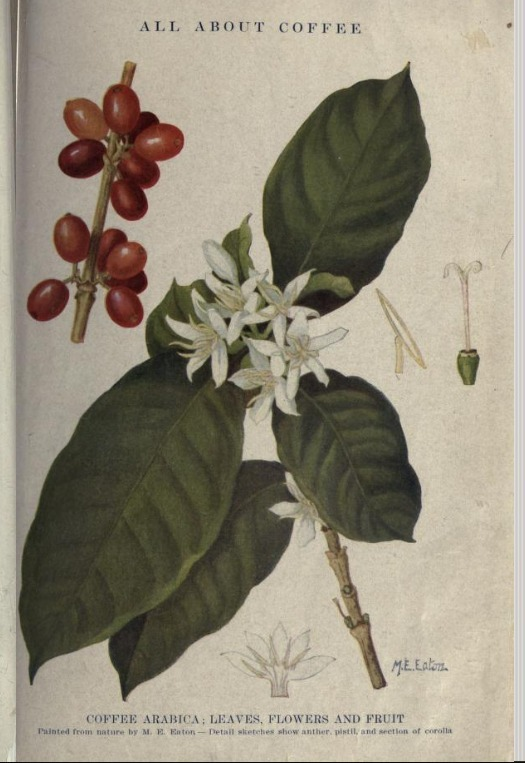 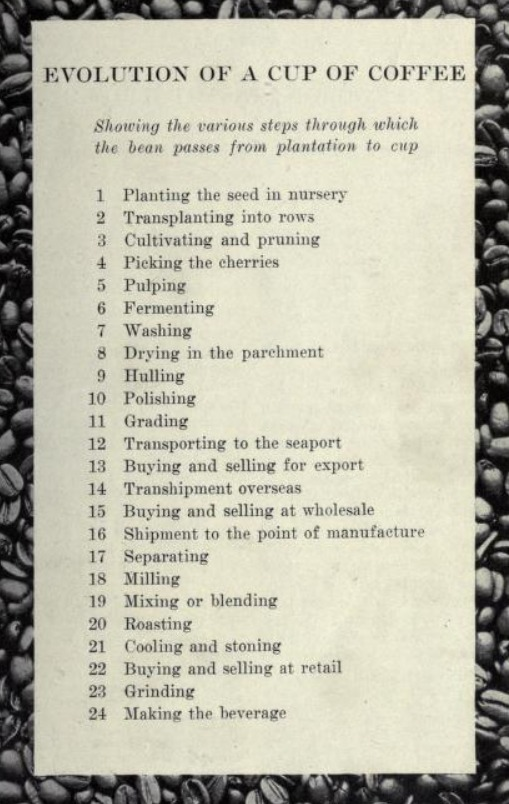 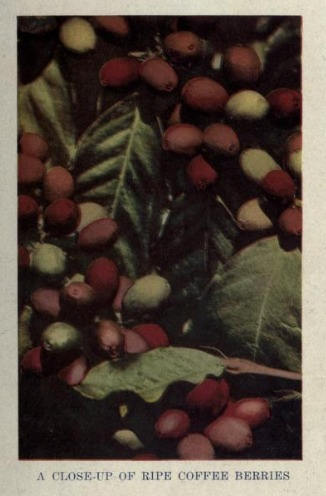 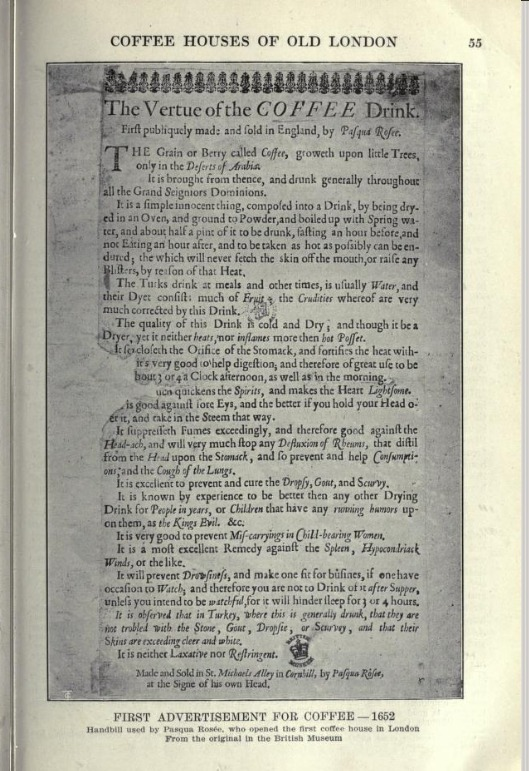 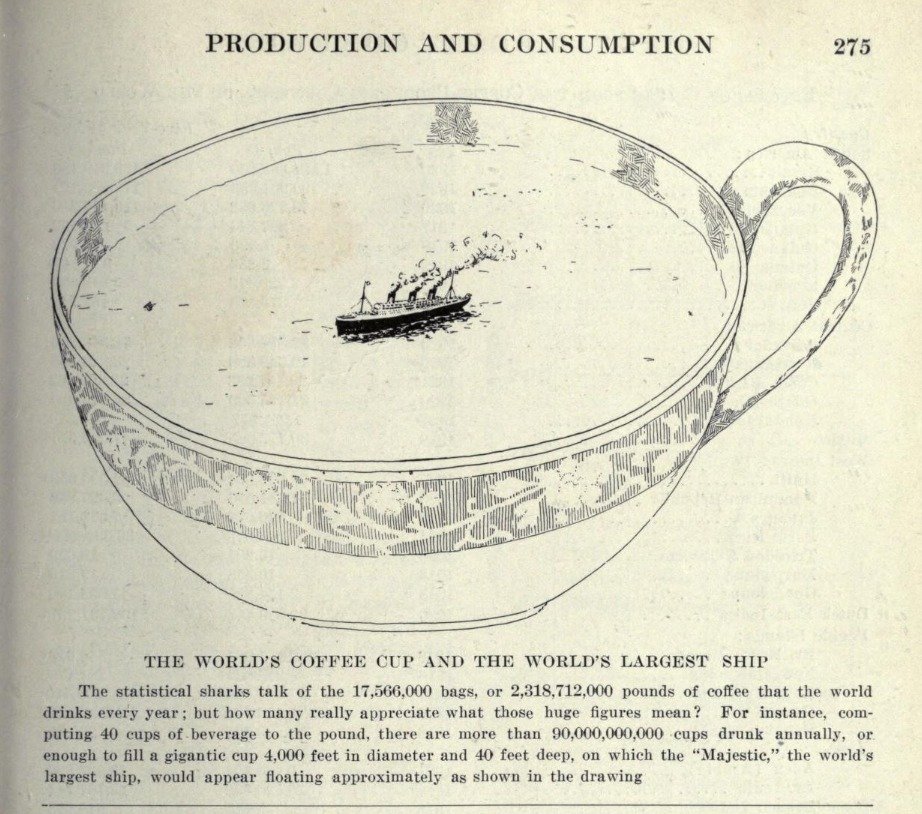 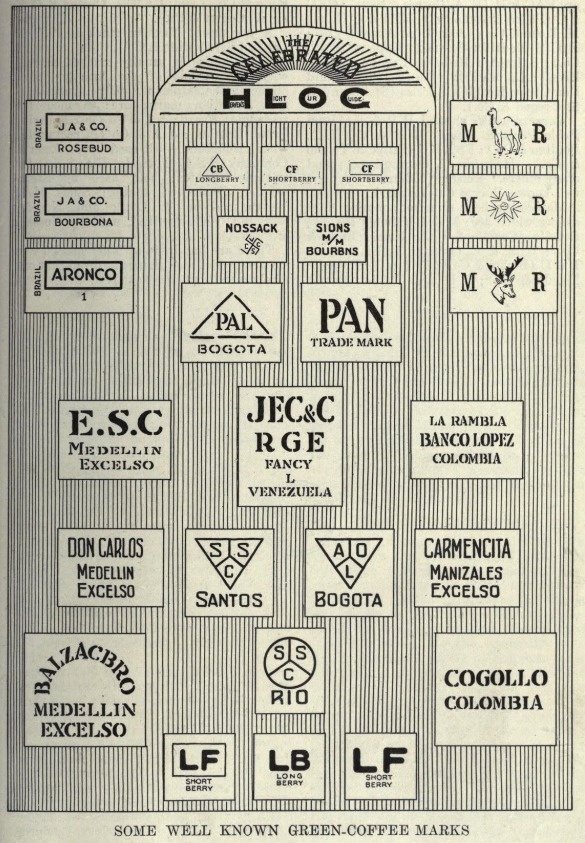 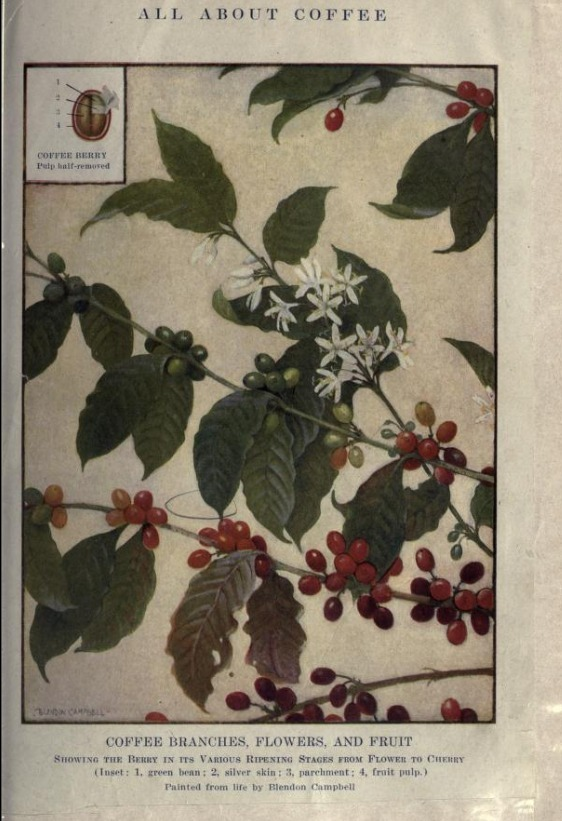 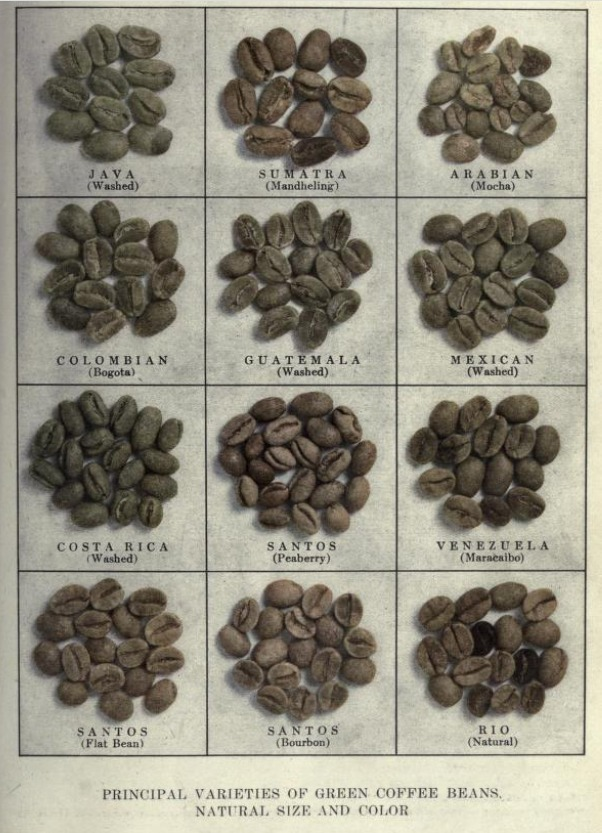 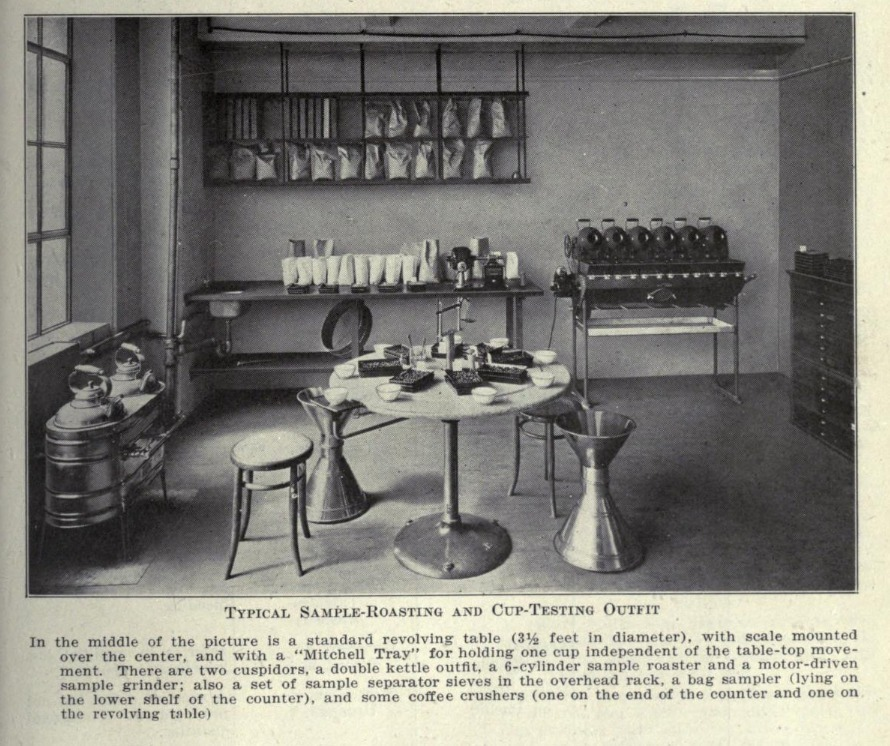 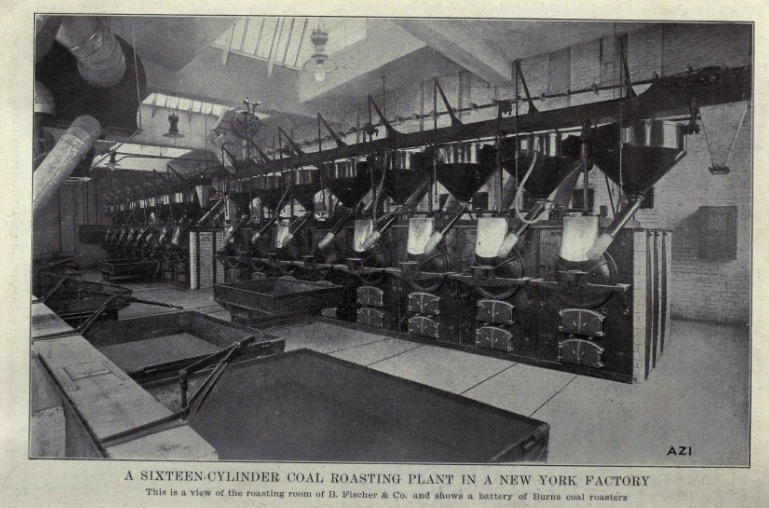 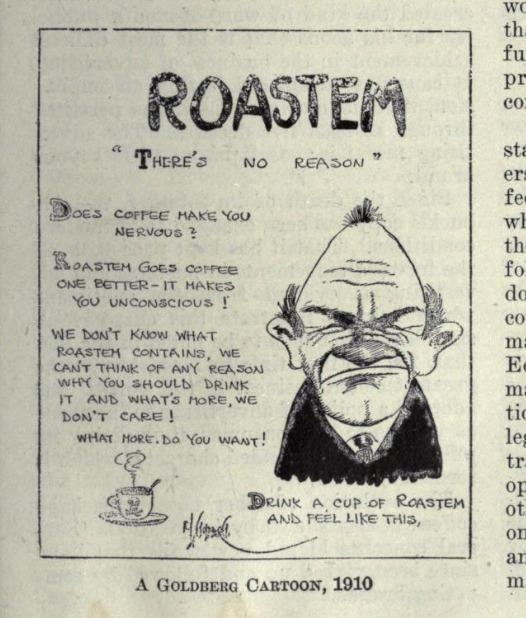 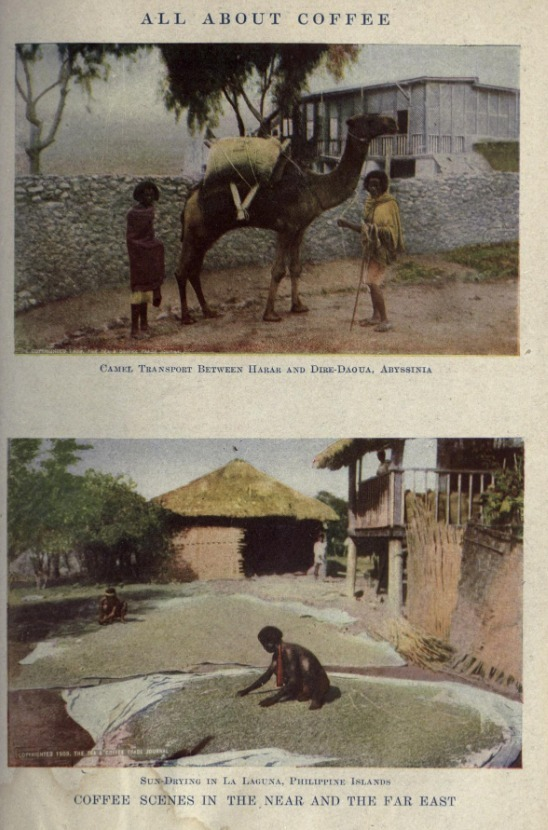 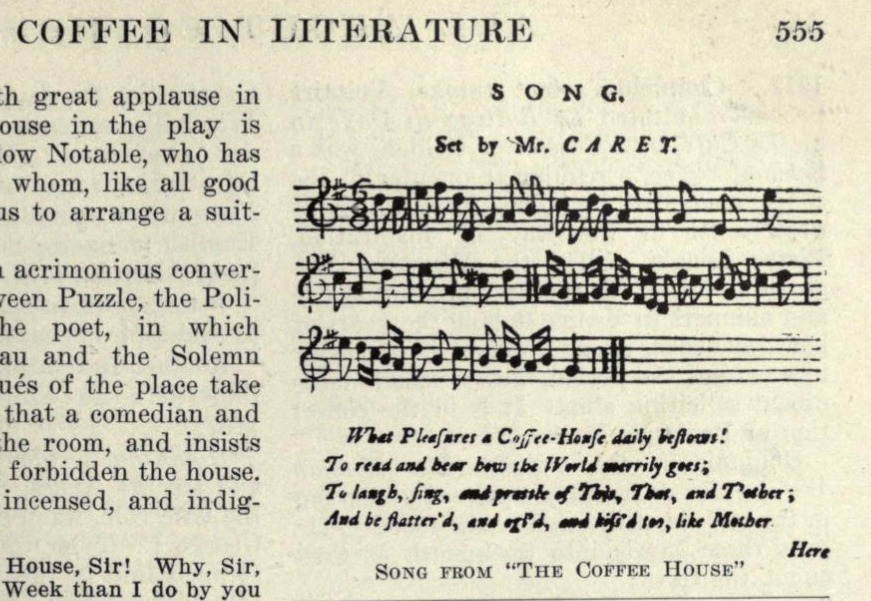 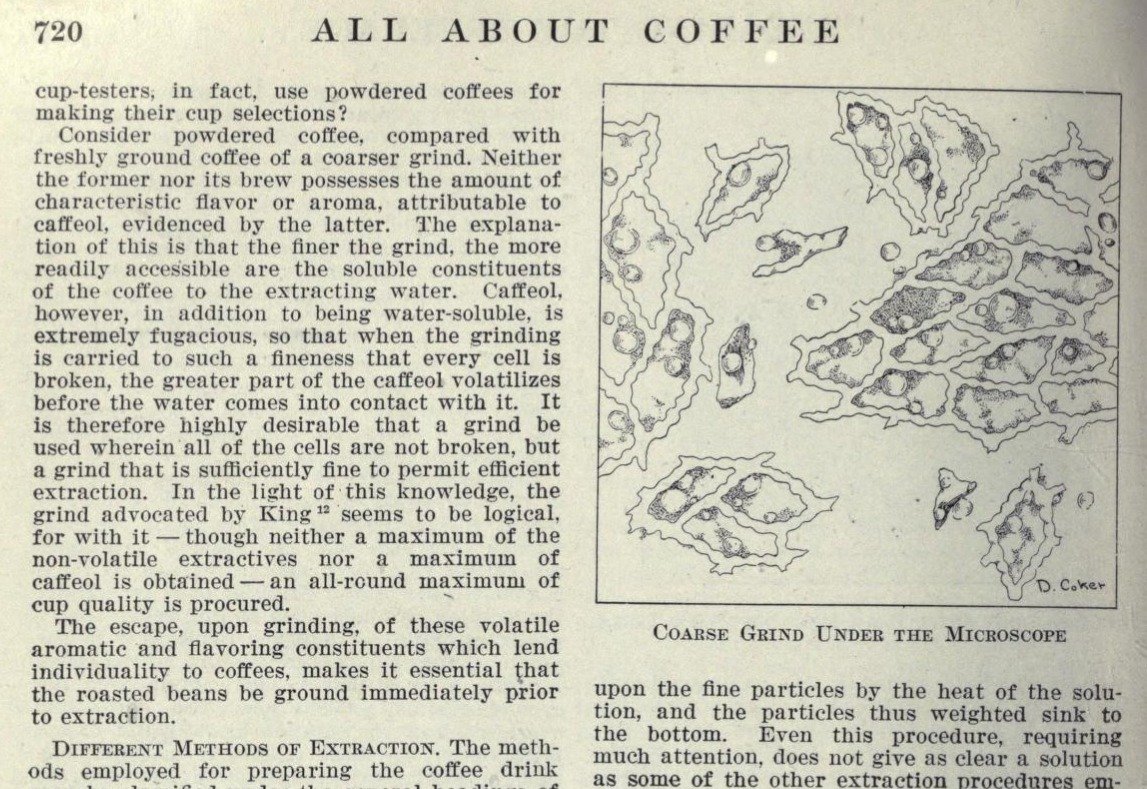 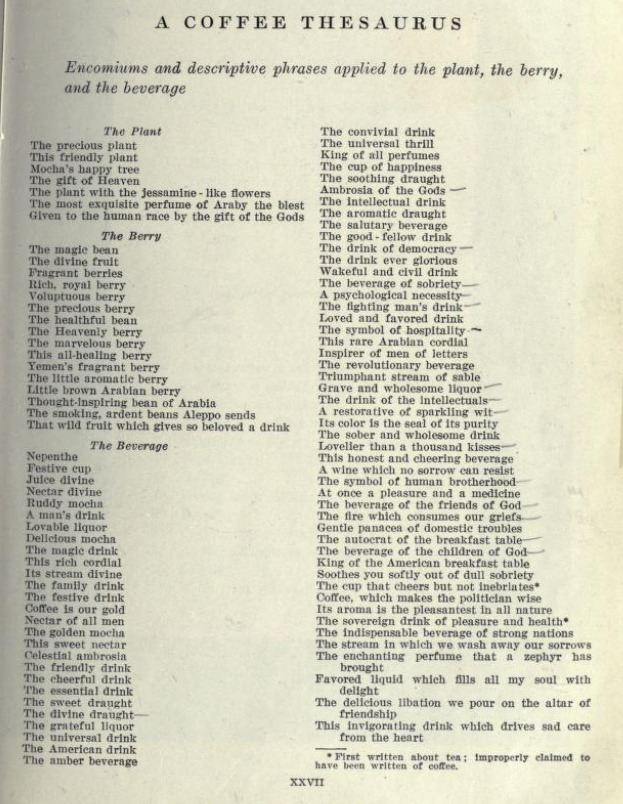 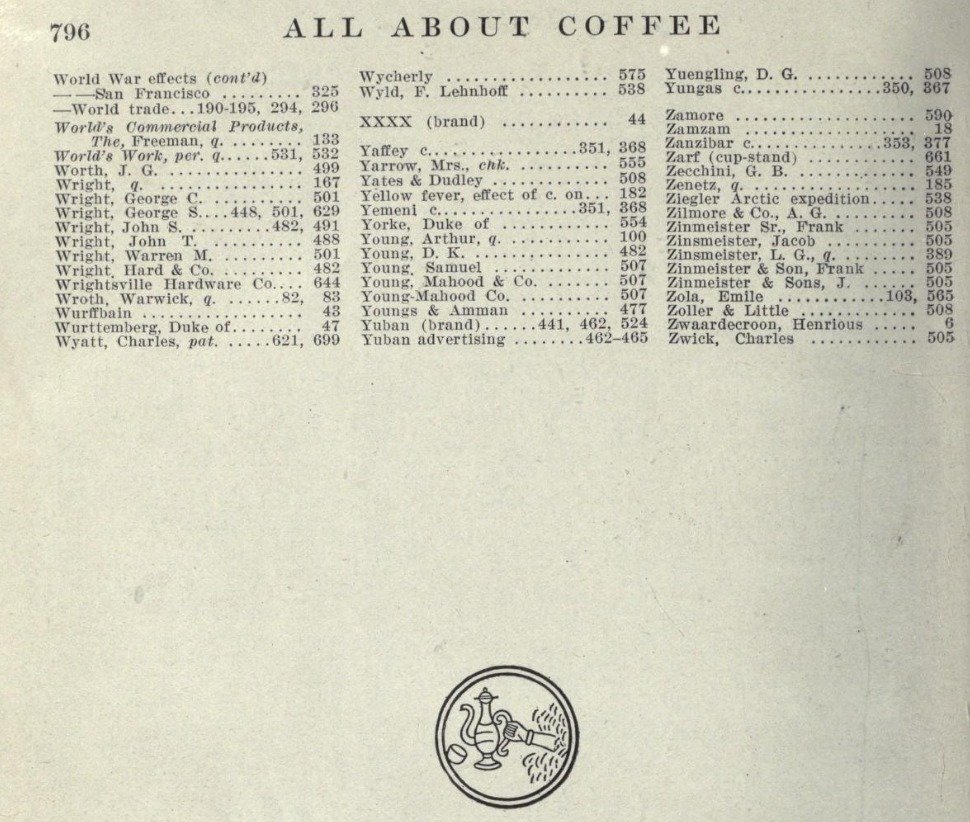 "Even if I might never be able to read the whole book at once, I would be happy to just sit with it now and then whenever I wished to disappear into the lanes of old Italy and watch the busy lady at the desk brew a cup of hot coffee. Beautiful, beautiful book!" ♥
Ukers, William H. 1873-1954
🙏 ☕️ 👏
#AllAboutCoffee #centenary 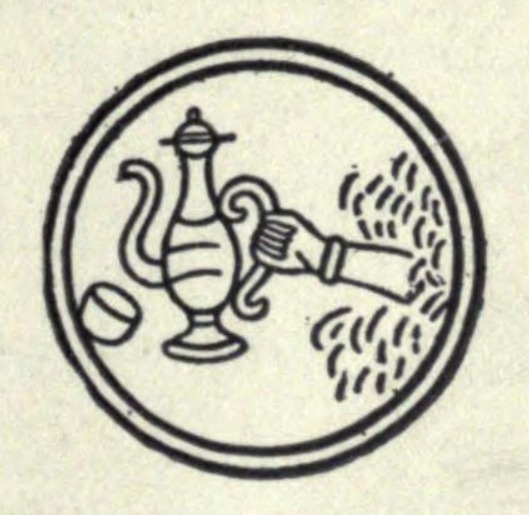 INDEX - (for) A REFERENCE GUIDE TO ETHIOPIAN VARIETIES

The index of almost 200 varieties listed on alphabetical order! 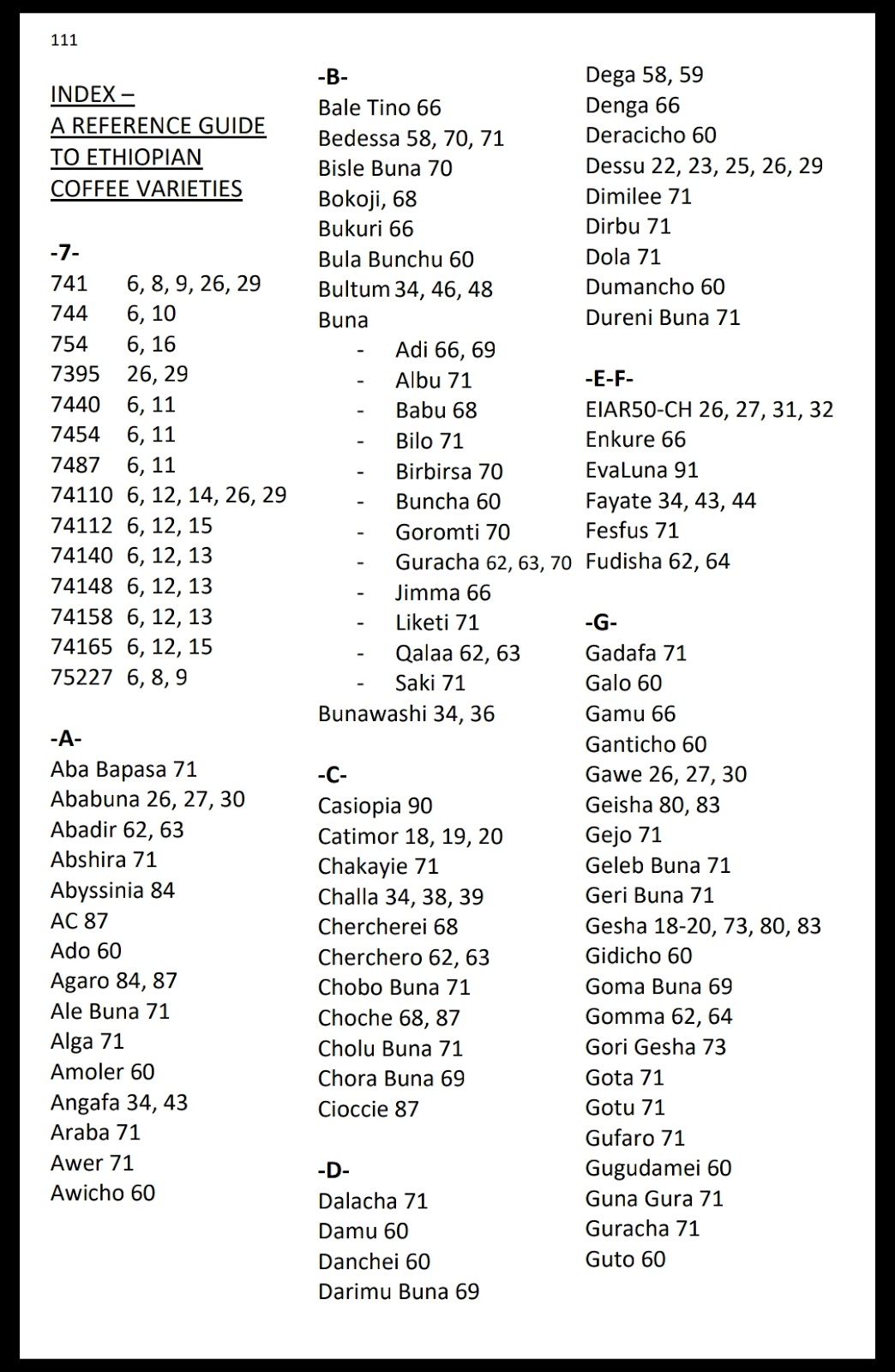 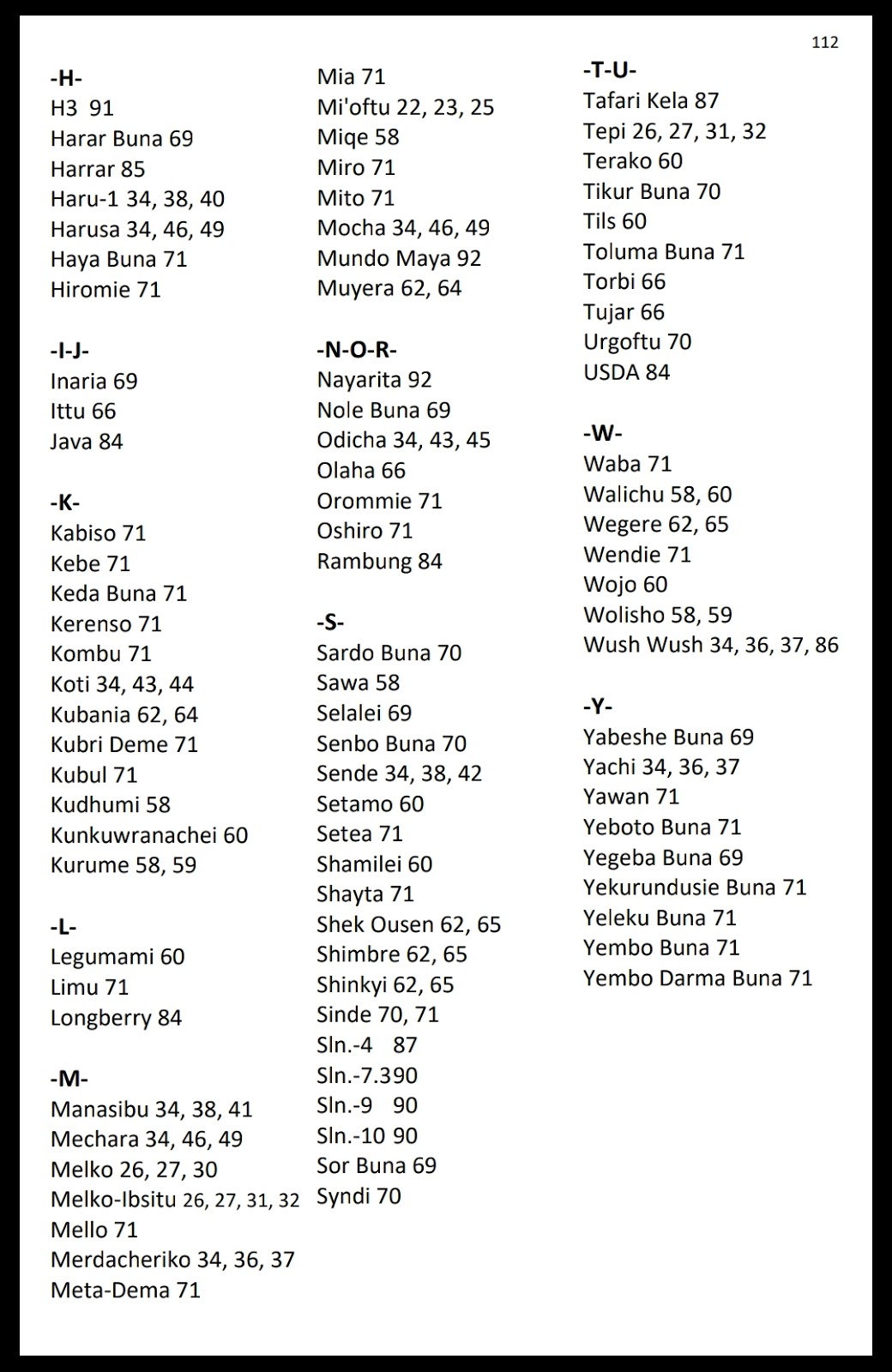 Every now and then most of us in coffee trade and hospitality, get questioned about ‘that first moment’, when coffee became a/the big/gest part of their life, be it as amateur or (later as) professional. Often heard is THE moment someone drank ‘another’ coffee, then they were used to. Probably the time and place and mindset and (in both senses) company intervened considerably. Let’s agree to “blame” serendipity here. (I ♥ serendipity)

For me it was a build-up several years, being around my father, him always creating some mythical stuff around brewing, ordering and tasting. Respectively, a pinch of salt on the grounds and blooming first, very important! (I’m talking the 80’s now). Ordering meant asking for the exact description of the beverage, usually espresso, so especially on holidays in Spain it had to be a café solo (NOT just “un café” or worse, “un expresso”). And tasting… the first sip always seemed to decide his mood for the next hour(s). It became a habit to – cautiously – ask him after that first sip had sunken in: “And? Is it good..?”.

Later I inherited his Krups portafilter machine, a holy (albeit mostly plastic) device, for only being meant to be used on special occasions. Between then and now coffee slowly, became more and more one of the (three 😉) most important things in life for me. Continuously upgrading my soft- and hardware, fed by more (and more, and *more*) information and all other 3rd wave’s be(a)nefits, sideways collecting logo branded espresso cups as a hobby that is getting a bit out of hand 😂. And oh yeah… switching careers 11 years ago!

Of course I do remember the feeling and experience my regular cortado at Dutch first specialty shop Coffee Company gave me about 20 years ago (often made by barista Jasper Uhlenbusch, their current green coffee buyer) – a cortado then being a sophisticated step-up from bigger milky drinks from lesser quality beans; the moment from whom I had my first specialty beans (Has Bean UK as a 12-months subscriber back in 2008!); and I do know when I drank my first Geisha (in 2013 and no, not a Panamanian but the ‘original’ first Central-American, a Costa Rican, from Coffea Diversa via Brazuca Coffee Amsterdam).

All are great moments and memories! But was one of these my real first sensorically subliminal momentum (“a stimulus or mental process below the threshold of sensation or consciousness; perceived by or affecting someone's mind without their being aware of it.”)??

These pictures represent *that* moment probably best. This is “Inproc”, an ancient establishment (read more about them below) in The Hague, The Netherlands, where I, as a little kid at the age of 8-10 years sometimes joined my father when he was buying tea (!).

The walk up to the doorstep always raised excitement, literally. And also a pleasantly weird aversion 😏 just narrowly overtaken by curiousness with regards to… the aroma of roasted coffee [💥] !! Overwhelming in all senses, together with the noises from the customers, the negotiations, … and that roaring roaster, all of this in a weirdly darkish atmosphere, creating a mysterious ambiance, as if sensory secrets were being produced and traded (which they were of course 😬). This is the place where the seed must have bean [sic] planted in me!

✏ Now.. how about your roots in coffee?!

Already in 1853 this company started selling Indonesian products in a shop in The Hague. Three different families ran the business for 114 years until 1967 when the pictured Buys family took over. Piet and Corrie had little experience with stores, but by opting for quality and attention they were successful (hear, hear!). The coffee was freshly roasted and ground by themselves and they also blended the tea in-house. The focus more and more became on these two products, no longer selling other (typical Indonesian) products such as “kroepoek” and “tempeh”. After Piet's death in 1993, Corrie continued with the help of trusted employees. Unfortunately, Corrie also passed away in the first decade of this century. The store threatened to close four years ago, but coincidentally it was saved by a Chinese statue in the shop window. The statue was owned by the Buys family. The owner contacted Krista, the daughter of Piet and Corrie: she had to come and get the statue because the store was closing. She couldn’t let that happen and decided to… buy the store back into the family! Krista succeeded her parents with pride and enthusiasm. To this day – 20 steps further down the same road, there are still customers who already came to get orders from her parents at the time.

THE Q IS GOOD FOR YOU


Here below you can find lots of information when thinking about and preparing for "The Q" aka the Q grader certificate. That's either the Arabica or the Robusta course, because the type and amount of exams for both are pretty much overlapping. Needless to say, the coffee types are different ;-) Also needless to say that the main starting point is CQI's very own website

A very helpful website, giving a clear overview is Andrew Hetzel’s coffeestrategies
-click the left menu and its texts-

Andrew also set up the Standards and Protocols for Fine Robusta.

Recognize roasting degrees and get loads of other info at Sweet Maria’s Legacy:
(p.s. The Roast ID exam is quite another ballgame when doing the Q for Robusta I can assure you…)
And the fine people of SM also can teach you to taste.

For science in coffee, a must visit is Coffee Chemistry, especially this on acids, part I part II part III

An overview with descriptions and insights from Royal Coffee: "Passing The Q"

The full story about my own week, as written by my course ‘Qolleague’ Cerianne Bury:
(I sadly fell off the adjoining picture on the left side?!? Seriously Cerianne, we have to talk…)

Another report from Coffee Review´s Kim Westerman and a brand new overview (Oct '21) by Tomas Laca.

Your own (borrowed) training set of Le Nez Du Café‘s 36 aroma vials is also recommended for practicing. (There’s also Le Nez du Vin, of which you might want to get some vials for Q Robusta.)

Try to read and prepare as much as possible! The Coffee Cupper’s Handbook is revised in 2021.
The first 3 calibration and training days are really a (extra) practice then, instead of multiple panicking shock and awe moments 😨
Also check out this clear cupping (form) disquisition from the one and only @trishrothgeb @wrecking_ball coffee roasters (former CQI director of Q)
https://youtu.be/_94H5-G3LDc

Qood LuQ! You Qan do it! May the Q be with you!

The Alphabet for Alternative Uses with Coffee

Sprinkle the used grounds near the ants´ traces. You could also stuff their holes between the tiles. It won´t chase them away forever, but they´ll be gone for a good holiday.

The whether or not forbidden fruit these days… If you can get your hands on it, make yourself a nice tea-like brew of the dried coffee cherry husks. The nice flaky Chaff (roasted silverskin) might also be used as a (legal?) alternative: you need a handful of the fluffy stuff to brew a similar style, but non-sweet light tea.

Use your fantasy! Make signs, coasters, glue them to your walls, melt in the bottom of candles, fill vases and put tealights in them, compose letters, numbers or words.

If you can´t make a brew, then get a chew!
Especially after consuming onions, garlic and other leeks (see also at letter H).

Those husks (see: Cascara) can be milled to a fine flour.
Substitute a part of your regular flour in your baking recipes with it.

There is a way to use the oils from coffee to make garments or use the grounds to produce bed sheets.

Been cutting those leeks, garlic and onions?
Grab some grounds and wash your hands and fingers with it (also see letters E and S).

OK kids, this is the only use I’m NOT promoting nor encouraging! It’s just… well, possible, but the effects are quite shocking. Better to follow the advice of one of the commenters below this article: “If you really feel you need more caffeine, just drink a second cup.”
So: Do. Not. Try. This. At. Home! (nor at your fav coffee bar).

Arm bracelets, neck laces, ankle bands… you name it.
Pinching the holes in the roasted beans can be quite a tricky operation though.

When overfermented natural coffees are not good enough for you (think descriptors like winey, overripe fruits, rum/raisins), then get your scoby and DIY!

Before we go to the next letter you might want to brew some liqueur yourself, with either ground coffee, (cold-)brewed coffee or both!

Well, you might have heard of the Coffee In Good Spirits Championship before…? Shake it like Brian Flannagan! The M also bridges us via "Mushrooms" to the next letter:

Grow a coffee plant, pick, process and brew and afterwards use the grounds for other plants as a nutritient. Oyster mushrooms also grow particularly well on coffee grounds.

Place a small tray with grounds in your car, microwave or other stinky surrounding overnight. Freshly ground preferably of course..

A very artistic way is to use the brew as paint and for instance put it on canvas.
Plus: lots of Perfume makers use coffee as (part of) their base.

If those teas listed under letter C. are not sparkling enough for you, then add some ginger and cinnamon: kind of Chai-ish, so there’s another C. (making the Circle round).

Rolling your barbecue out? Then Rub your meats with fresh grounds and roast it!
Some brewed coffee can be added to your marinades.

Go further than hand cleansing (see H.) and scrub your whole body with it. The abundant shower afterwards is like a full body ;) brew flowing slowly through the drainpit.

Kaffeeform and Huskee are two examples of how to upcycle grounds ‘n husks into cups ‘n saucers.

“Vintafy” your beans from crop years ago by freezing green beans, roasted beans or tossing & turning them in your warehouse.

“By adding sugar and silicone to coffee, the researchers were able to make a foamy brick that held together on its own and was easy to use as a filter. Soaking the brick in water caused the sugar to leach out and leave the coffee grounds open to bind to metal ions in the water.”

Get a powerful UV light and scan the defects out of your green beans.

Masking the fact that perhaps this should have been listed under letter M. we better relax, enjoy life (and coffee) and keep those wrinkles away. (P.s. you can also add yogurt to your coffee, when that washed Kenyan coffee isn’t acidic enough.)

By now you probably want to try all these prior uses out?! But wait… “Being mindful of how you make your coffee shows you how to be mindful in every part of your life. Smell the aroma…  Breathe in…, Notice, hear, listen …. Let yourself sit for a moment or two, to obtain the full flavor of… Meditating.”

Whatever you’re gonna use coffee for (except injections!): Keep enjoying coffee, either way!

(disclaimer: I'm in neither way affiliated with the companies in the links nor cannot be held liable for any consequence arising from the recommendations following these links in the broadest sense)
Gepost door mazelcof op 05:38 Geen opmerkingen: